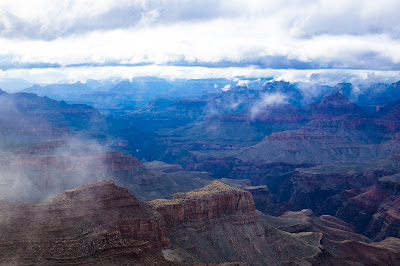 Don't. You'll be disappointed. You're not going to get any picture that hasn't already been done better. Don't even bother with the camera. Okay, do, but don't expect anything. Expect it can be a challenge, an exercise, a test of your skill, but if you're pointing your camera towards a big hole in the ground and snapping the button you won't be showing off photos with any real wow factor, not like you would expect. The Grand Canyon has wow factor when you see it in person, and yet somehow the grandeur doesn't compress into a twenty megapixel jpeg file.

Plus the light is terrible. The sky is bright and the canyon is dark. The clouds are completely blown out fields of white, and the canyon is various shades of black. This sort of snapshot is best used as a frustrating exercise in post-processing. If you're serious about getting a good picture you can bring a set of graduated filters and spend lots of time finding the right combination of darkening the sky and exposing various depths of the earth while your friends stand around bored. I'd rather not, most of the time.

Not to say it isn't fun. Walking around, looking for compositions, trying new angles, posing, and generally looking for cool stuff you haven't seen before, it's part of any good vacation. It's also an opportunity to be social. Because everyone has a camera, and sunsets are the enthusiast photographers' watering hole. It's fun to watch the sunset, fun to line up with everyone, discuss the weather, the equipment, lenses, and play a round of what have you seen today. It's fun to at times turn the camera away from the sunset and towards the people. 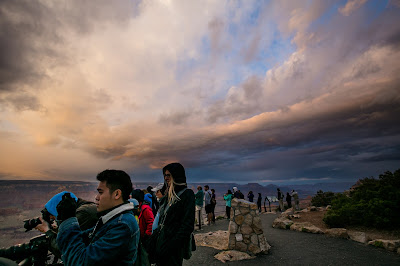 Okay, so it isn't realistic to go to the Grand Canyon and not take pictures. And as much as I warn against it, I can't resist taking the same photo from the same view everybody else does, so let's get that out of the way. The first day I walked around with only a 50mm lens. And you can take a sub-par photo, convert it to high contrast black and white, and have something kind of, okay. 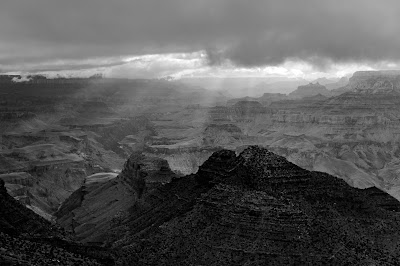 Occasionally you'll mindlessly snap a photo, say of the rising full moon, and later on think, I kind of like how that looks. Good enough for memories. 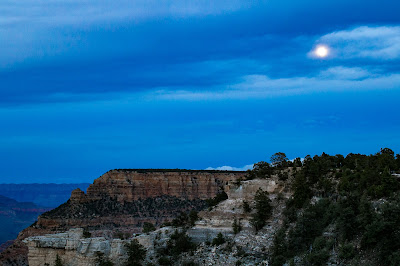 If you're really lucky you'll get bad weather and have lots of clouds, fog, and snow in your picture. Better than the typical sunny day from the observation deck railing. 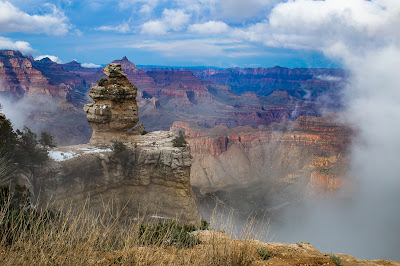 Better yet, don't photograph the canyon, take snapshots of people and use the canyon as a backdrop. Like a cowboy leading a mule train. 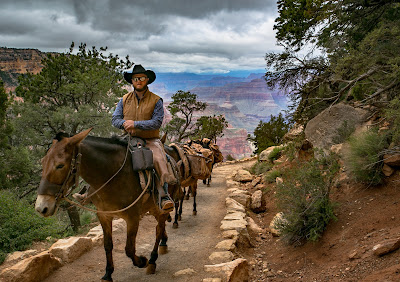 Or how happy you are to be at a place called Ooh-Aah Point. 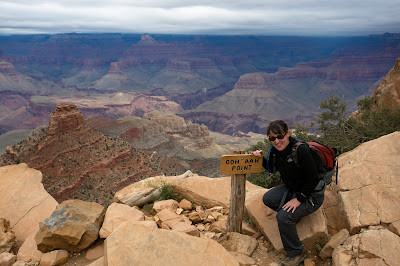 Or just living on the edge. 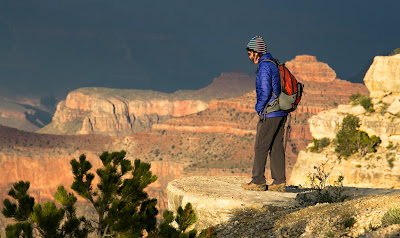 Finally, if you insist on doing the typical canyon shot, you can take two approaches. You can try to subtly bring out the details to get a somewhat realistic view that doesn't look like you've spent an hour fiddling with the color balance. Trying for the natural look. (full disclosure: it doesn't hurt to nudge up the orange and blue saturation, just try not to look like you're doing that!) 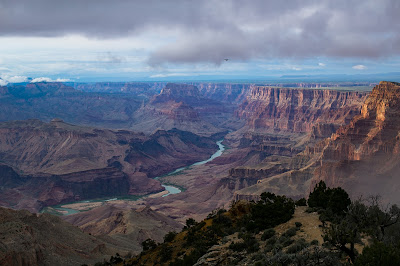 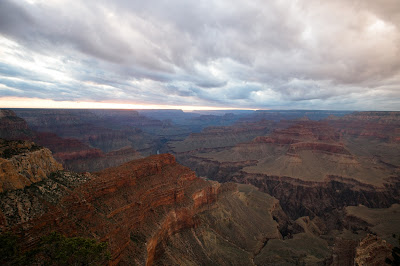 Or you can point your camera directly into the blazing sun, exposure bracket the crap out of everything, and go for a look that's completely stylized and to hell with the purists. 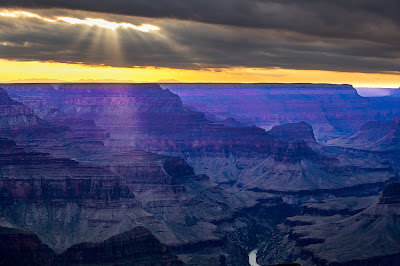 The pictures don't do anything justice. It's simply better being there.