The Most Photographed Wreck in the World 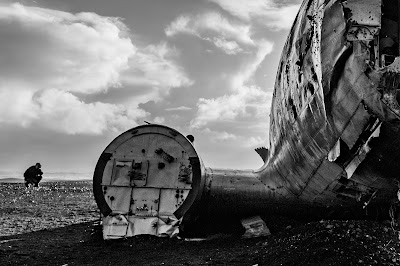 When asked for one tip about traveling to Iceland, I said read the photography blogs. It's a picture paradise and whether or not you're a shutterbug you'll find some uniquely beautiful places you might not have seen otherwise. One of my best planning resources for this trip was Earth in Colors, which has an excellent list of favorite places to go and what time of day they are most photogenic.

Tami said her one tip for Iceland is: bring goggles.

Our story involves a stop at the famous DC-3 wreck on the southern coast, a 4km walk from an unmarked parking lot on the ring road (better directions can be found here). Don't ask me how many miles that is. I can either think in metric or imperial units but I refuse to convert from one to the other. Kilimanjaro is just shy of 5,900 meters and Mount Elbert in Colorado is above 14,000 feet and I don't need to convert units because I would never compare the two. Iceland is a European country and it will always be metric to me.

In any case, 4km is a long walk, a good hour each way. Even worse, when we parked the car and started out, we were facing high winds and freezing rain, sideways rain hitting us right in the face. The whole way. It was, in a word, miserable. Even with good rain clothes getting a face full of cold water is not comfortable. Now, we had just returned from a guided glacier hike where we were constantly rained on and subjected to two separate hailstorms. This is where Tami decided that goggles are on her list of required equipment for Iceland. Since the road to the DC-3 is practically across the street from the glacier, we parked the car and started walking towards the ocean. Into the wind and ice cold rain pelting us face-on.

I didn't take any pictures on that walk. It was all we could do to keep moving forward, walking into the wind and rain like that. I didn't even think about getting my camera out of its storm bag, I didn't feel like getting the lens soaked and I didn't think it would make a good picture anyway. Getting rain to show up well on camera takes the right lighting conditions and I was in no condition to think about what those might be. On the way back, after the weather improved I did take this photo showing how long and boring the walk is. Just a black gravel road on a black sand desert vanishing into the horizon. Imagine facing this in a storm and you'll get an idea of how badly I wanted to see this plane. 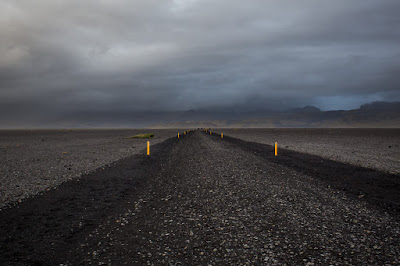 So we trudged on and on, not daring to stop, barely speaking. There were no words of encouragement I could offer, nothing to make it easier. I gave up trying to see through my glasses, trying to keep the rain off my face. I wouldn't say I got used to it, only that I got through it. When I started thinking we must be getting close by now, we stopped someone walking the other way to ask how much further it was. A long way yet, he replied, a long way. We didn't ask anyone else. We trudged on, faces stinging with the cold.

Eventually, in the distance, we saw it. And when we saw it, the rain stopped. To the east a double rainbow appeared. I started running immediately, running to catch it, literally chasing the rainbow. I was in a race against the ephemerality of light on the edge of this mercurial weather and it felt good, I was energized, goal in sight, warmed by my legs bounding beneath me. Then I stopped myself, realizing I had simply taken off running without saying anything to Tami, not so much as a see you later. I turned around and before I could shout a quick explanation of why I was leaving her there, she waved me on. She knows, she understands. I continued, running as fast as I could to the side of the plane just in time to get a few pictures before the rainbow faded away. My cold hands nervously fumbling at the camera, that miserable walk was immediately forgotten. 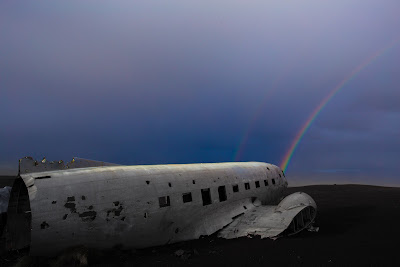 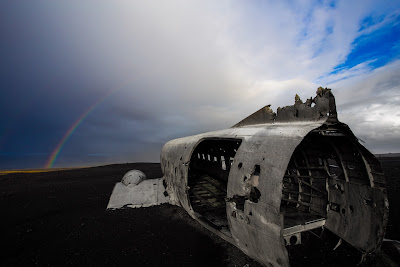 Tami, who for the past hour must have been wondering why I wanted to take her on the worst hike in the world, the least comfortable, least scenic (did you see that road? Imagine nothing but that for an hour each way), until now when the simple addition of an old airplane long since stripped to its shell renders the scene otherworldly, and coincidentally the sky became sunny, and warmed us, and the wind died down and Tami must have forgiven me for dragging her face-first through a subarctic storm. She was running around making airplane noises. 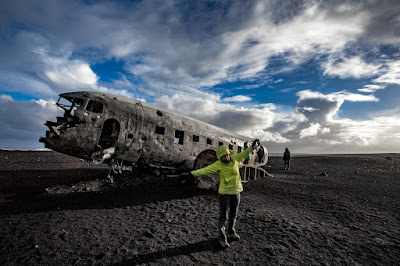 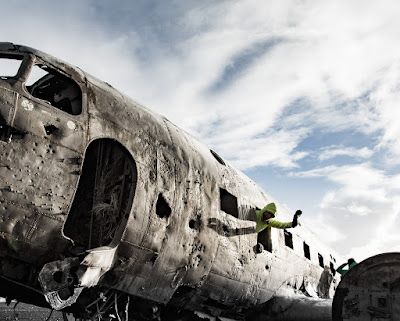 This is no insider secret. The place attracts crowds and we're all there for the same reason. People love to get pictures of themselves around, in, and even on top of this plane, so the challenge can be getting a photo that doesn't have people walking in and all around it, climbing on it, pointing cameras at each other.

So you're walking around with everyone else, trying to find an angle where, just for a moment, it looks like you're all alone. If you're patient, and quick, you can get that 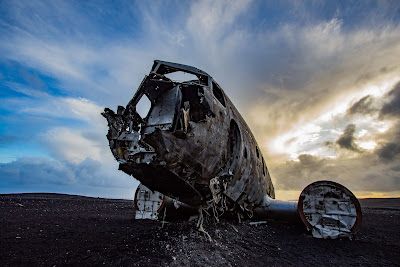 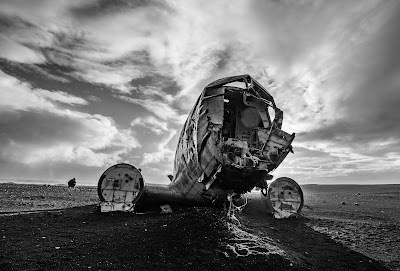 The superlative otherworldly is often used to describe Iceland, and I think that could be applied to any incongruous artifact dropped into a field of black lava sand. Honestly, it looks like a DC-3 crash-landed on another planet. 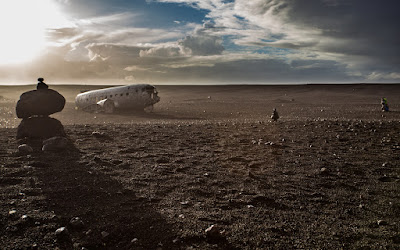 Beyond the plane is the sea, the sky, and a seemingly endless black sand beach. 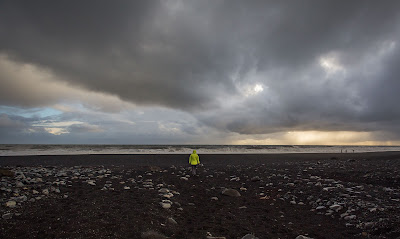 We walked back to the car, drove to town, and had a nice warm bowl of cauliflower soup.


See also Icelandic Blues
Posted by asdf at 10:23 AM