I signed up for a free trial month of Keenai, the new photo storage service by Ricoh. It sounds too good to be true, unlimited storage for RAW and JPG files for $50 a year. I have a 500GB SSD that I've been filling with RAW files for a year and it's about two-thirds full. Soon I'll put this one away and start on a 1TB drive. Can I really keep a copy of all my RAW files, could be approaching 1.5TB in a few years, not to mention more prolific and established photographers with even more.

Full resolution JPGs will be nice. Google Photos charges $24 a year per terabyte and I've been restricting photo size 2048 pixels wide to keep my total files under a terabyte and the subscription cost at that two dollars a month. Which isn't bad, but I wouldn't put RAW files there, and when I want to produce a full size JPG I go back to that little SSD.

So I uploaded some JPGs, just whatever was in directories I've been creating. There's two from 2012, a tiny invisible blip on the far left. In the middle there's a spike in June and July, that would be summer in Napa. Then towards the right there's more regular activity with the tallest blip a trip to Iceland. 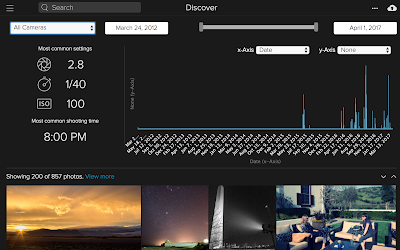 Now the pretty picture. Here is every camera I've used in the past five years, ranked. At top is the Ricoh GRII, followed by the heavier, more tank-like Canon 6D. The LX100 makes a fantastic vacation camera, and the Canon SL1 was my first foray into DSLR photography. Throw a couple phones and you round out recent history. Before that, for years I used the compact waterproof Sony TX10 (the photo there is a view of the clouds in front of Kilimanjaro as seen from a moving car). 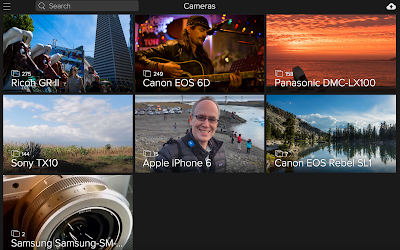