The "Decisive Moment" in Family Snapshots

Henri Cartier-Bresson described photography as trying to capture the "decisive moment," where all the pieces of a scene come together to be expressive as a whole. An instant before or after just isn't the same and I've missed enough shots by a fraction of a second to teach me to keep my eyes open and my camera on continuous shooting mode.

As a simple illustration of this principle, let's look at the contact sheet of one composition at a recent family gathering. I was originally going to take a picture of my niece playing piano when the scene changed into a girl and her aunt playing together.

So I shoot a bunch and later choose-- which one? I like where she has her finger on a piano key and they're both smiling at each other. One shot out of seven and I will gladly throw away six (or more!) to get that one. Funny thing I've found that more often than not my favorite is either the first one (spontaneous!) or the last one (where I'm finally happy and stop shooting). In this case, I liked the second-to-last. 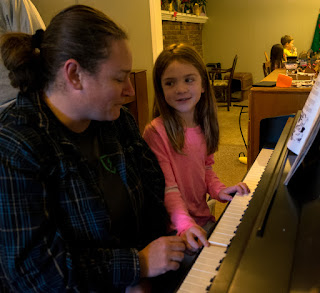 And maybe I'm biased, but it helps that she's cute as a button.
Posted by asdf at 7:07 AM