Walking and Talking Past Each Other 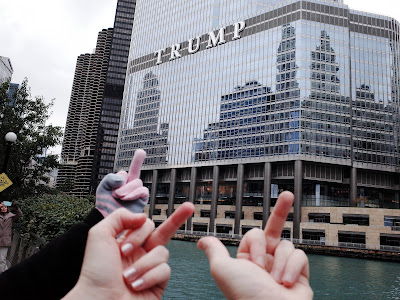 In Chicago, I took the same picture I take when I come across any building of this moniker, but this time I had friends to help me. As we collaborated on this piece, I noticed a group of three people watching us. I don't want to stereotype, but let's just say they looked "rural" and "Trump-voterish," and after we took the picture, as we were walking past them I heard one of them say to his friends (not to us), "Too bad Hillary doesn't have a hotel, we could do that too."

And as we walked away I said to my two friends, "But Hillary doesn't have a hotel, does she? Because that's not what she does."

And the two groups of friends continued on their separate ways.