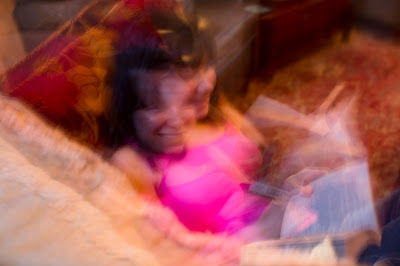 "What I like about photographs is that they capture a moment that's gone forever, impossible to reproduce."

"All photographs are memento mori. To take a photograph is to participate in another person's (or thing's) mortality, vulnerability, mutability. Precisely by slicing out this moment and freezing it, all photographs testify to time's relentless melt."
-Susan Sontag


In a sense, the act of photography is an exercise of living in the past, making and displaying pictures of what once was. You take a girl's picture, a portrait, say, and you care very much for her so you zone focus from 1.5m away with a wide aperture using ambient lighting. Your camera is close to her face, your hand is on the camera. You snap the shot. Light, flying from her at all times three hundred million meters per second, slips through an open shutter and hits the sensor which translates it into a digital picture. By the time the photons get from the girl to your camera the moment is already five nanoseconds in the past.* It is seconds old before anyone sees it. I like to process my photos at home, at which point the moment is hours, if not days, in the past. By the time it's uploaded, maybe sharpened a bit, shared, and admired, we're looking at something that is long gone, the image of a face that has since moved on to other interests and pursuits.

*If you're using natural outdoor light, well those photons were on the surface of the sun only eight and a half minutes ago, but the light bouncing off her face is not the same light at all, each photon having been absorbed into the orbit of some atom or molecule near the surface (her face, hair, shoulders, and) an instant later the energy flung out to where a keen eye or silicon chip can form a picture. Reflection isn't reflection, light is absorbed and re-emitted. So you can think of the light as part of her, a product of her, light from the nearest star has been transformed by her and has assumed her quality and shape, a luminous dent she made in the universe, now presented to you in precise form. Light travels as a wave and interacts as a particle. Waves crash against the camera's sensor and electronics record the precise position and energy of the particles, creating, in a very real sense, an imprint of the person who was kind enough to let you take her picture.