They say your first total eclipse is like nothing else, that it induces a primal response quite unlike any other experience. Even astronomers say this. Some people who experience it once become hooked and spend the rest of their lives traveling around the world every two or three years chasing the next one. Me, I'm not fazed. I'm not after some transcendental experience. I've "done" astronomy, I know how the solar system moves, I have a mathematical familiarity with orbital mechanics and I've stood in a shadow before. An eclipse crossing nearly the entire continental U.S. was to me simply an amazing opportunity and I wanted to see it, perhaps try my hand at a challenging bit of celestial photography.

I didn't expect it to affect me the way it did. I didn't expect my nervous system to completely wig out at the sight of a black sun high in the midday sky. You don't realize what a profound impact the sun has on your senses, so ever-present as to be impalpable, and for two minutes I felt the absence of something I didn't even know was there. I not only saw the eclipse, I felt it, and with my nerves going full tilt in the throes of synesthesia I'd swear I could even hear it.


A Modicum of Preparation

There are a number of ways to safely view a solar eclipse. Eclipse glasses (be careful you get good ones, and undamaged), a pinhole viewer (the safest method), or you can use a small telescope, either with a solar filter over the front or with a projection system, which is what I used.

This is a cheap-ish 70mm portable scope, and has a clever dual lens cap that lets you stop it down to 40mm. That big lens is a magnifying glass and it can get hot, so using less of it means less chance to melt the little plastic bits inside. 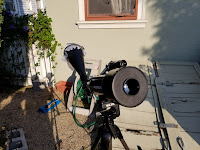 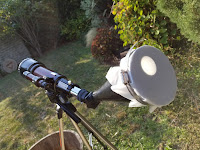 The plans for this setup were available on the NASA website and it's pretty simple to build with parts from the local hardware store. A funnel is cut to snugly fit the eyepiece at the narrow end while a projection screen is pulled taut over the wide end, in this case I used a white shower curtain (two layers) and a large hose clamp to hold it in place. I did this a mere week before the eclipse, tried it in the back yard, and it worked. I could see sunspots.

I like the projection setup better than the filter for two reasons. One, it's much, much cheaper, but more significantly, the projection screen allows several people to watch at once, and we had a lot of people wandering by to take a look.

With this for viewing, I turned my attention to the camera. I bought a solar filter for my 300mm zoom lens which goes on the Canon 6D which goes on a sturdy tripod. B&H photo threw in a set of five solar glasses for free with my purchase, so we had some to share. And with that, we were ready to go.

A Modicum of Driving

Suitably equipped, we just had to get to Madras, OR, in the path of totality. Getting there involved some driving, so for much of the trip the sun looked like this. 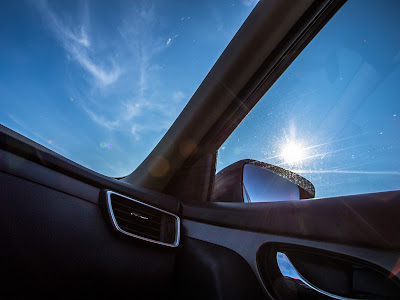 There wasn't a lot of traffic on the way there. We flew into Portland and came down from the north, spent a day in Bend before driving up to Madras, the night before. It was only an hour drive, getting there. Getting out would not be so easy.

We camped in a field, and when I say camped, we slept in our cars. This field was just a giant parking lot and the whole night I was thinking oh boy is this the wrong place to be how are we ever getting out of here this has to be the least scenic location we could have picked in the entire world.

We were directed to our spot. 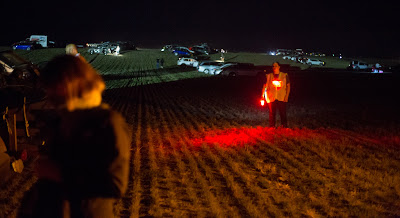 People just hung out and chilled beneath the starry sky. 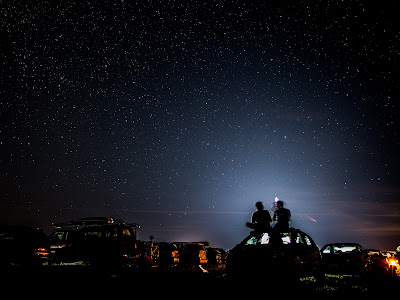 We watched the stars a bit ourselves before turning in. 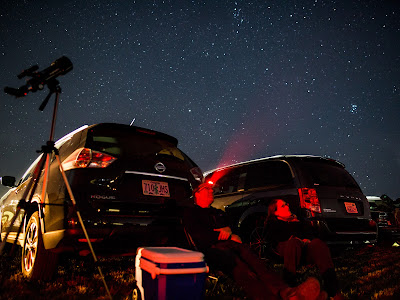 Morning came and everyone awoke. Now we could see where we really were. 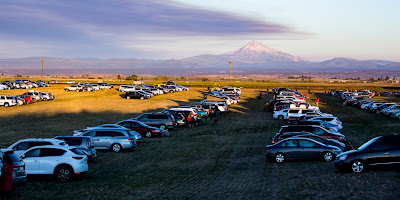 But you know what, it was more community than parking lot. People brought all kinds of telescopes and viewing instruments, and everyone was walking around excited to check out what the neighbors had, who were of course happy to share. 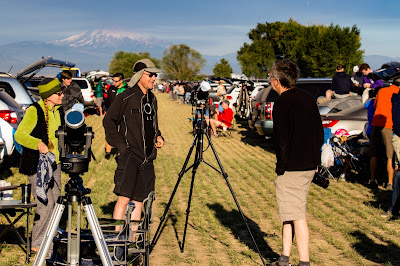 The obligatory jokers in tinfoil hats. They were there, too. 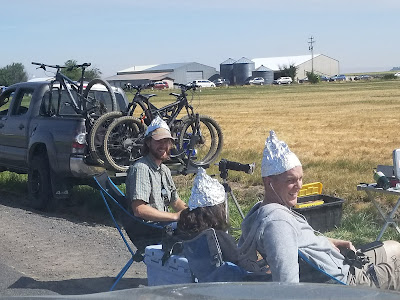 Somebody was preparing to take a balloon ride. That must have been a sight. Somewhere up above a skydiver's plane was getting ready. 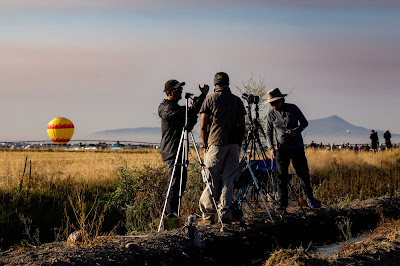 That solar scope on the right is a fancy bit of kit. 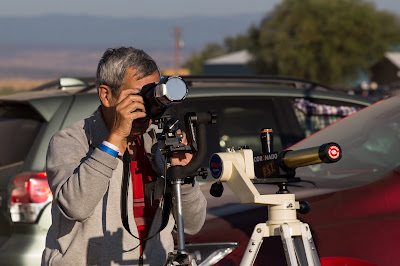 My own plan was as simple as I could manage. With the telescope projector for viewing, my camera would take a picture every few minutes until totality. First, I had to determine the proper exposure. At 300mm, the aperture set to f/11 should produce a nice sharp image, and after taking a series of test shots with different exposures, examining the histograms, I decided 1/125s was best.

When totality hit, the plan was to quickly remove the solar filter and cycle through a series of shots with different exposure times. I had no idea which one would work, all I could do was trust at least one of them would. I also had a compact camera for crowd shots and if I'm very lucky, a crowd shot with totality in the sky (spoiler alert: I was not very lucky).

And before we knew it, it had begun. The moon was edging in front of the sun. 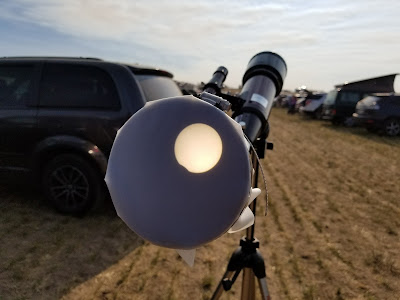 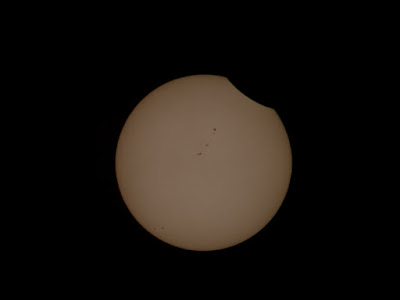 Everyone watched in rapt attention. 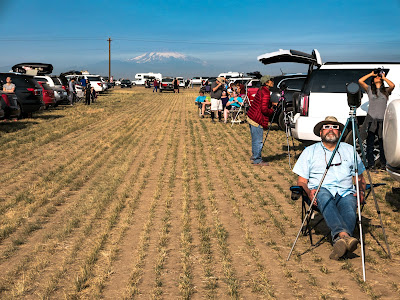 As the bite grew larger. 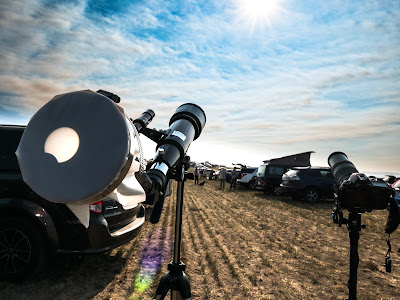 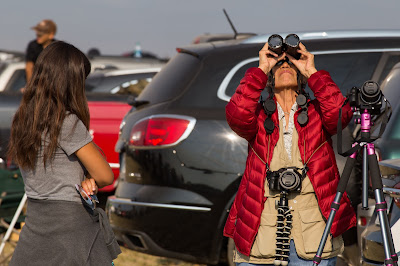 We saw the crescent sun wane. 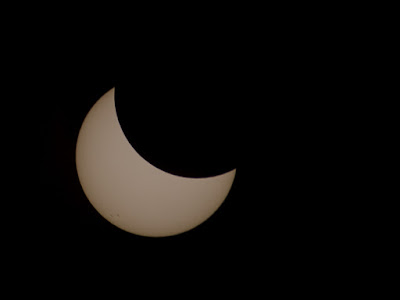 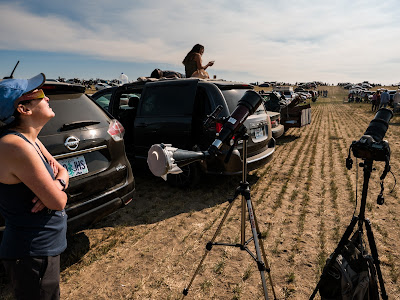 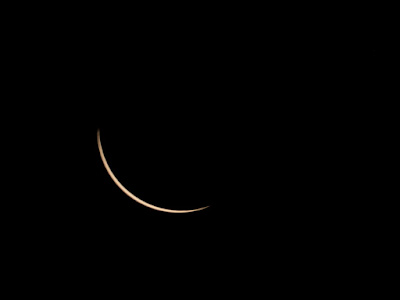 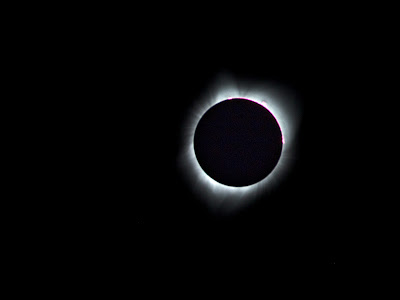 It's impossible to capture in a picture, but there are two aspects to the image. With a short exposure the sky appears black and you can see the faint prominences, red solar flares on the edge. 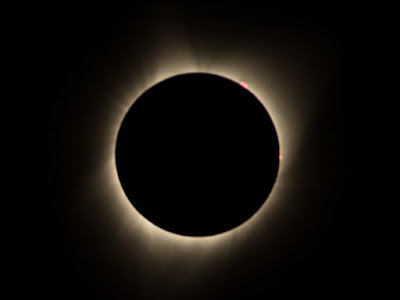 With a longer exposure you see the solar corona, hot gas ejected from the sun, faint enough that it is washed out in normal daylight. The sky wasn't completely black, more a dark blue, strange color. And there's a star just below the sun. 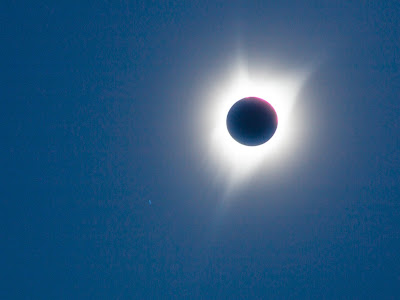 Totality ends with a flash of light, as the edge of the sun reappears, forming what's known as a "diamond ring." 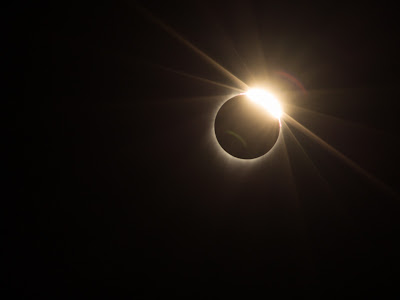 And Now, Sitting in Cars 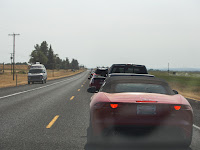 And with that, it's time to go. Thanks for coming, now please enjoy eight hours on your three hour drive.

We had loaded up snacks, science podcasts, and playlists on the theme (Total Eclipse of the Heart, Dark Side of the Moon, You're So Vain, and so on), and with a full tank of gas we were prepared to sit in the car along with everyone else. 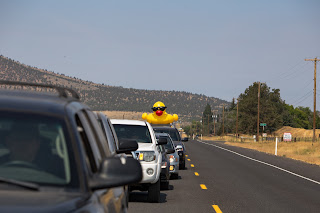 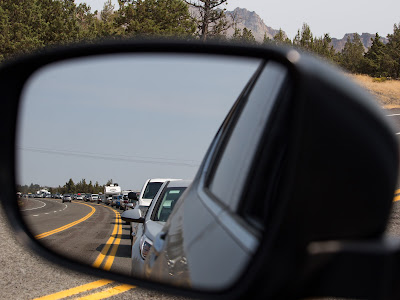 There's one road out and the speed limit signs are only there to tease us. Don't be fooled by this picture. If we had been able to go 12mph the whole way I would have been so happy. 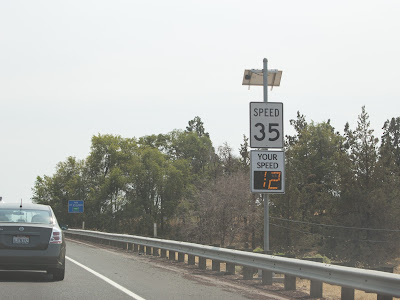 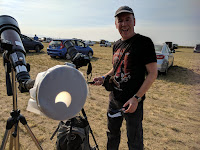