It was early morning at the bottom of the Grand Canyon and I was chatting with a blonde Australian woman from Phoenix. In my sleep-deprived addled state I struggled to formulate an answer.

"I don't know, four, five hours? Huh, I can't seem to do math right now, I guess I got in pretty late last night. Um, seven? No, I was definitely on the trail by four-thirty in the afternoon. So by nine it was, uh, I got to the river at eight-thirty so, four-thirty minus eight forty-five, whatever that is. Plus this morning I woke up at first breakfast call I was so excited. Watched the sunrise, sort of. So, um, yeah, tired. But happy," I grinned.

"Was that you who got in so late? Everyone's been talking about you, this one headlamp coming down the canyon wall."

Ah, I thought, so you arrive late and exhausted, have a few beers and brag to everyone, and word gets around, this crazy guy who gets on a plane in the morning and hikes down that same night. I guess I did talk pretty loud over a few beers in the cantina, and then after a few beers did go back out into the night with some drunk Frenchmen to chase the rising moon. Now I could use my typical self-effacing humor to deflect from all that boastful derring-do, I could laugh it off, or I could say the one thing that just popped into my head which just might cement my reputation as a local legend.

"I had to," I replied, "I had tickets to see Hamilton Saturday night." 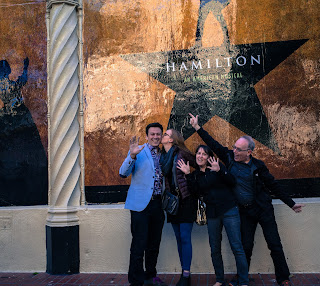 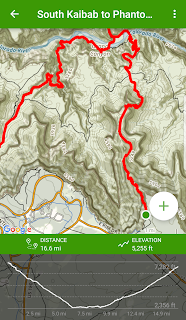 A must-see show on Saturday, tickets bought months in advance, and a last minute bed reserved at the bottom of the Grand Canyon Sunday. Which bucket-list item to choose? Or, as the Australian woman and I said in near-unison, "Why not both?" I don't know at what point I first wondered if it's actually possible, but when I did the math, 6AM flight, 8AM rental car in Vegas, and five hour drive puts me in the Grand Canyon backcountry office comfortably by 2pm. Wait out the hottest part of the day and start down at 4 or 5. Get to camp by nine.

In reality, delays and minor bouts of disorganization take their toll, but if that's kept to a minimum, the thing is doable.
Downloaded a map on the AllTrails app. Had a paper map and compass for backup, but really the trails  are so well marked it would be difficult to get lost.

"Did my hiker get off?" the shuttle bus driver asked everyone as I checked my pack one last time. The other shuttle passengers answered, "Yes." I walked out past the front of the bus and gave him a thumbs-up and we were both on our respective ways. In my hand was "the beast," a Canon 6D with 17-40mm f/4L, Canon's lightest full-frame 35mm digital camera and the lightest "L" lens, but the combo was still 1.25kg strapped to my right hand. Just like power-walking with weights. With a hiking pole in my left hand I was ready for the long walk down.

My first goal was to get safely down to a bunk bed waiting for me at the bottom. Confident in that, I turned to my photographic goals. I had two pictures in mind. I'd seen a picture of the trail going down Cedar Ridge and wanted to try my hand at that. Then, I wanted to be at a nice scenic spot when the sun got low and bathed the canyon in warm shadows.

Rangers ask a lot of questions when you show up with full pack and request a backcountry map late in the afternoon. As the backcountry folks told me, it's not typical, but people have done it. Before I got on that shuttle bus I had this conversation.

Ranger: "You're going down now?"

"So you're hiking at night."

"Yep. At least the last hour I figure."

"You have a headlamp?"

"I have two, just in case." I didn't mention my cell phone could also be a light source of last resort because really, I'd already explained how I have a GPS map and want paper as more of a security blanket and I would have loved to have shown her my high end compass -slash- emergency signal mirror but the questions kept coming.

"The saltiest. Salt and Vinegar Pringles is my jam. Plus jerky, bars and gels and various things. This pack is full of snacks."

And so it went on until she, satisfied I wouldn't be annoying her later with a need to be rescued, handed me the map. I said thank you and made my way to the shuttle stop to meet the friendly bus driver who would be taking me to the trailhead. 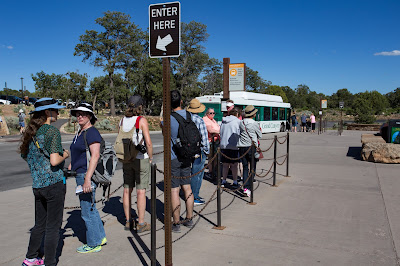 The good news? Instead of 110degF I was expecting, it was 80F when I arrived, and 80 in the desert is a nice spring day. So with that bit of luck, camera in hand and pack on back, I was able to make good time and not be quite so worried about heat, thirst, etc., really my toes got the worst of that seven mile, five thousand foot descent. It was a gorgeous day.

The first part of the trail, near the top, was not lacking for company, people having a good time, and couples enjoying a walk. 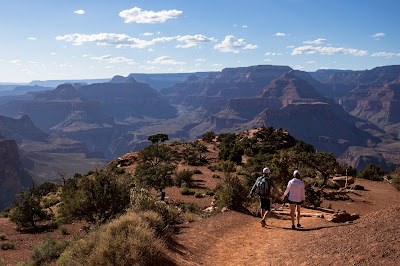 When I got to Cedar Ridge, I tried my hand at framing the picture I thought I wanted. I long ago made peace with the fact that before any trip there's the picture I think I want, my expectation, the way I imagine it will be, and then afterwords I find the shot I didn't expect, somewhere surprising, and that's the image that makes the trip.

This is the trail down Cedar Ridge. 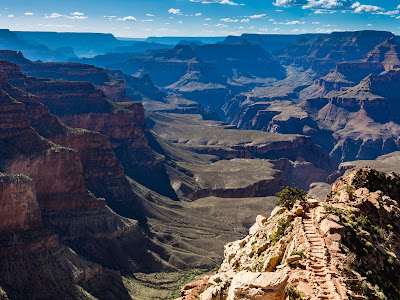 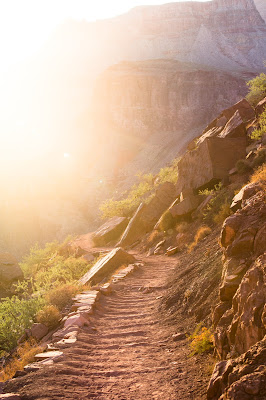 The sun was going to get low soon, so I hurried through switchbacks to get to a point with views of the canyon wall.

A lot of landscape photography is chasing the sun. It goes faster than you might think.

I wanted to be in a nice scenic spot when the sun and the shadows are just so... 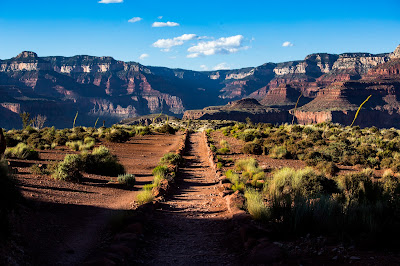 This is about where I stopped seeing other people on the trail, and soon it was night. You don't really see the sun set from inside the canyon. The shadows fall and it just gets dark. Eventually I was navigating by headlamp. Eventually I was obsessively checking my watch and GPS tracking exactly where I was at every moment. Eventually I was just putting one foot in front of the other, trusting camp was down the trail and I'd get to it, eventually. 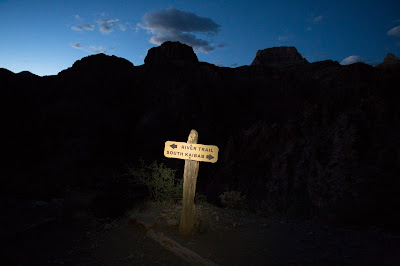 After four hours, eight miles, and five thousand vertical feet, I had to cross a bridge over the Colorado River in the dark. 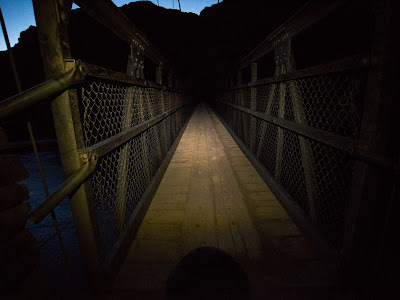 Fifteen minutes later I was in the Phantom Ranch cantina with a group of French tourists, drinking beer and swapping stories. 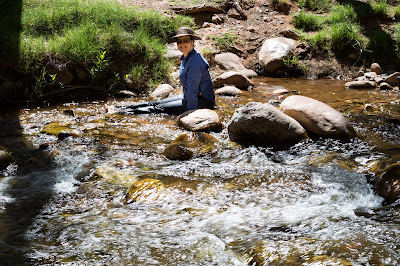 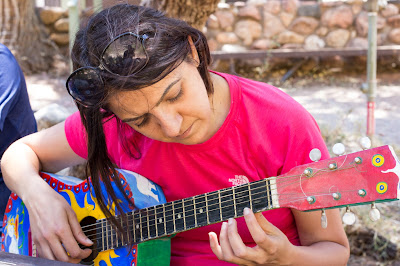 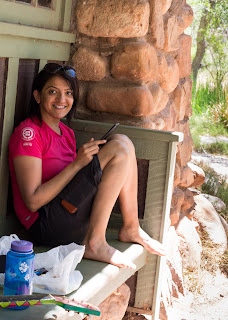 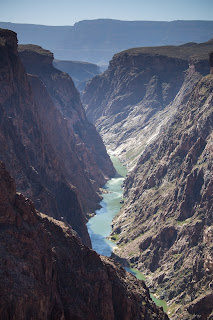 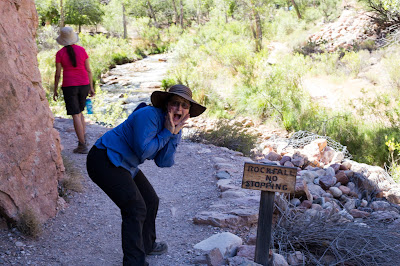 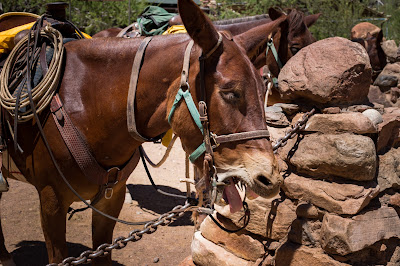 If I got lucky weather for my descent the way back up was unbelievable. The night before we had an argument over whether to start at 2AM or 4AM. Someone heard somewhere that it wasn't going to be very hot the next day, so naturally we voted over some objections to start at four. That means getting to the top around noon, which can be very hot in the summer. It was the middle of June.

For the ascent I put a 50mm on the 6D making the lightest configuration for that camera. For the most part, 50mm was fine, except when I saw the moon setting behind the canyon walls. I had to stop, change lenses to the tele, take this picture... 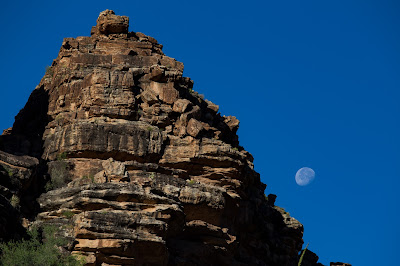 ...and then back to the 50mm and eventually catching up with everyone.

The weather? A high of 70F! That is practically unheard of in June. We had a great time in the eight hours we took going up, including stops for breakfast, coffee, a second mid-morning coffee break, and posing for pictures. 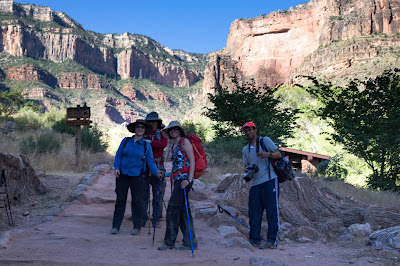 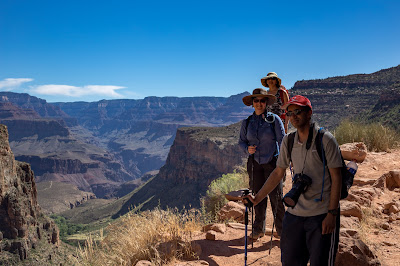 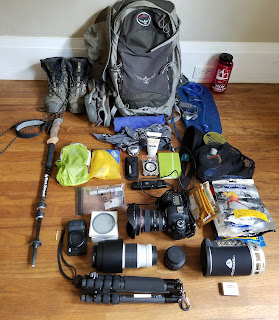 Also in the pack, a multi-tool, compass, first aid kit, sunscreen, camping stove, food for 2 days, snacks, water, a rain poncho I didn't need, and hiking pole. Plus spare clothes and a pair of Keens for camp shoes.


After we got back I saw a condor but wasn't quick enough to catch it gliding off into the distance. 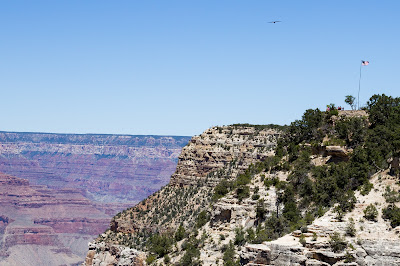 That evening we watched sunset from the rim. 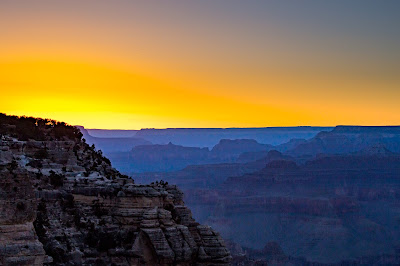 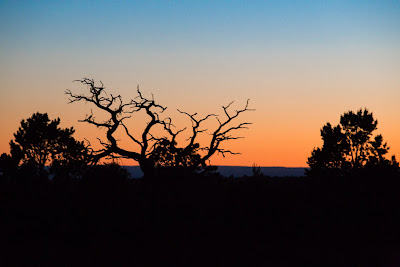 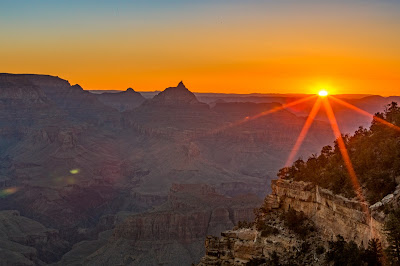 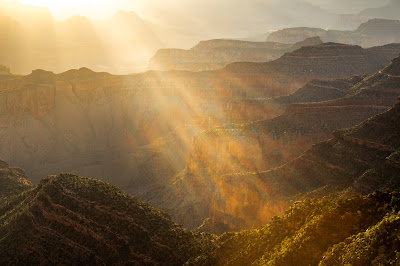 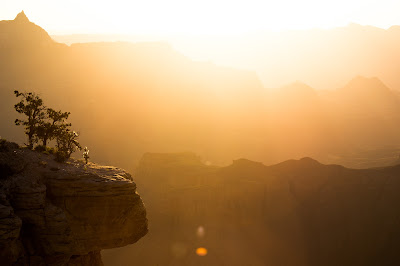