In the Pocket, Always

My philosophy in cameras is that there's many different ways to make great pictures, but there's still no substitute for a big piece of glass shining on a big slab of silicon. My walkaround camera has the same ASP-C sensor you find in most DSLRs but it will fit in my front pocket. It's a quick draw shooter with great image quality, when I do it right. 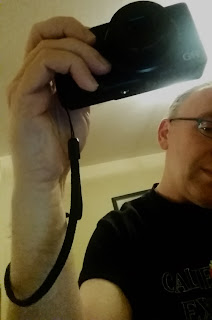 The Ricoh GR II, a neat little camera with a lot of tricks. in order to pack a big DSLR-sized sensor in that little magnesium body it uses a fixed, prime lens - that's right, no zoom - and a short one at that. At 18.3mm you're going to specialize in wide angle shots. This isn't the easiest camera to use, but that's part of its appeal. Every camera setting can be accessed while holding it one-handed and you better have all those settings right all the time. The first week I had it I'd say a good 80% of my shots were bad, unusable, I mean a blurry mess, never mind well-composed or interesting. The second week only 60% of my shots were unusable and I knew I was on the road to greatness.

Speaking of well-composed pictures, the 28mm field of view (full frame equivalent) makes even that a challenge. You really do need a near, middle, and far in every shot or you will get a big empty field of blah.

Now, when I do get it right, I'm rewarded with some spectacularly sharp pictures. No anti-aliasing filter means every pixel is sharp as a tack, but it also means you have to know what will and will not cause aliasing noise - and shoot accordingly!

Using it is a matter of paying attention to the camera and the scene at the same time. While the short lens makes composing a challenge, it makes focusing a snap. It's at its best when zone focusing, if you can't estimate 1 meter, 3 meters, and 5 meters by sight, this camera will teach you. I'm not afraid to hand this camera to a stranger to take a group snapshot (after putting it in auto mode), but this camera really shines when you pull together all the variables to produce an "artistically correct" exposure.

And once in a while, I achieve that.
At f/4 the depth of field is, I'd say, medium shallow. You can see the near and far have different qualities of defocus, giving the scene a sense of depth.


And talk about dynamic range! I had to get used to how much detail I can pull out of the shadows. A backlit sunset scene? Even here, I slightly underexpose while watching the left side of the histogram (which can be displayed on the LCD as you shoot) because I've found teasing details out of shadows produces better results than if I have an overexposed sky.

As you can see, the sky is nicely exposed while everyone is just a shadow. 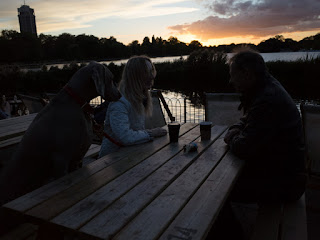 If you're watching the left side of your histogram carefully enough to avoid clipping, there's data in them thar shadows! I used Adobe Lightroom to lower highlights and boost shadows with a slight bump in clarity to bring out the real picture.
I'm pretty happy with that one. And so, it seems, is the dog.